Jujube fruits, which are known as red dates due to them looking similar to the Middle-Eastern staple, programme lung, breast and prostate cancer cells to commit suicide, a study published in the journal Food & Function found.

Red dates are thought to trigger cancer cell death by causing 'internal stress' in tumours, according to researchers from the Royal Society of Chemistry.

The results occurred after cancer cells were exposed to jujube in the lab. It is therefore unclear if the fruit helps to prevent or treat the disease in humans.

Jujube fruits, which are used in Chinese medicine to treat insomnia, a loss of appetite and diarrhoea, are available in the UK for just £1.99 for a 40g bag. 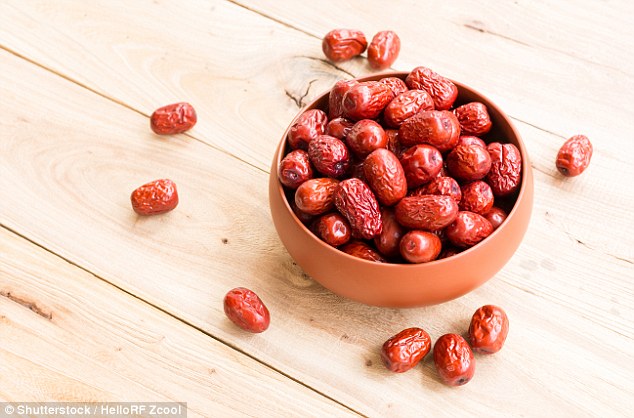 Results suggest four of the compounds reduce the survival rate of these cells.

Internal stress caused by the compounds is thought to damage tumours' structures.

The researchers believe jujube extracts could be used in cancer treatments in traditional Chinese medicine.

What are red dates?

Although jujube fruits look like dates, they are believed to contain 32 times more vitamin C, as well as being higher in antioxidants, than the sticky Middle-Eastern treat.

A portion of three dates contains 54 calories and 12g on sugar, on average, while the same amount of jujube has just 28 calories and 6g of sugar.

Jujube fruits also contain 18 out of the 24 amino acids that help with the formation of proteins in the body.

'It's not easy to find something that tastes good and is good for you at the same time.'

This comes after research released last May suggested a blackcurrant-extract supplement can burn as much fat as four weeks of regular exercise.

When taken twice a day for just one week, the vitamin increases fat burning by an average of 27 per cent, with one study participant achieving a rise of 55 per cent.

Known as CurraNZ, the supplement is made from New Zealand blackcurrants and costs £21.75 for a pack of 30.

The berries contain nutrients, called polyphenols, which are thought to encourage fat burning during exercise by increasing blood flow, according to the researchers.

'Anything above 20 per cent is typically what we expect to see with three-to-four weeks of regular endurance exercise training.'

Up to 78 percent of relaxers, which are used to permanently straighten hair, contain hormone-disrupting chemicals, known as parabens, a study by the Silent Spring Institute, Massachusetts, found.

Past studies suggest parabens, which are used as preservatives, mimic oestrogen and may cause cancer, weight gain and reduced muscle mass.

Up to 78 percent of hair products, including leave-in conditioners, also contain phthalates, the research adds.

Phthalates are added to prolong products' shelf lives and have been linked to breast and ovarian cancer, as well as early menopause.

Out of the 18 products analysed, 11 contain chemicals that are banned under the EU cosmetic regulations due to their links to cancer and female infertility.

Results further suggest that hair products aimed at black women contain up to 45 hormone-disrupting chemicals, which are not generally listed on their labels.

All of the products contain at least one fragrance, which have previously been described as 'gender benders' due to them encouraging male-breast growth.

The worst offenders were found in hair lotions, root stimulators and relaxers.

Lotions claim to moisturise, while root stimulators are thought to encourage hair growth and strength.